by Wizards of Twiddly 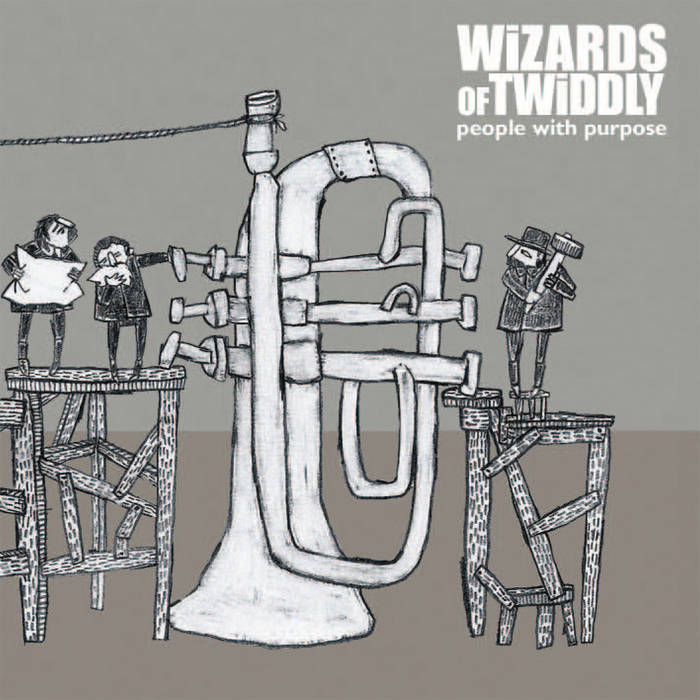 Tom Landon How did I miss this? It's magic stuff! Excellent music expertly played - and the words are excellent too, which is even rarer. If you're hesitating, don't. Buy it! Favorite track: Ping Pong Head.

Three years in the making,, 'People With Purpose' - marks the first full album release since the band reformed in 2004. It features material premiered on the band's live appearances with Kevin Ayers in the mid 1990's. ('Just Above Your Thing', 'Sounds of Success' 'The Great Unwashed').

''People With Purpose' is a manic jaunt through blaring horns, enigmatic vocals and frenzied bursts of guitar, which is all tied together with the deepest rhythmic grooves you could hope for. Mad, bad and dangerously addictive.' Steven Reid seaoftranquility.org

''Yes, they're still quirky always bittersweet, richly detailed and with a down-to-earth brilliance. With People With Purpose the Wizards Of Twiddly have created a richly detailed living thing of an album, something that sounds absolutely honest and engaging with their real world.'' The Organ ('Thing of The Day') May 2011

''This is album of the year for me .The Twids have returned with an album every bit as strong as "Independent Legs" and "Man Made Self" - and sounding even better. The recording and production work is flawless. They have never sounded so good '' Nick Loebner progressiveears.com - 21st Century Progressive Rock

‎''Liverpool-based stalwarts get better and better; they have a great new album out, People With Purpose - recorded over the last couple of years, it sounds great, catches some of their live energy....That unique mix of classic English prog, bits that taste of Cardiacs or Gong and bits that are all of their own'' organ magazine @ resonance fm

''When someone gets around to re-scripting the map of the musical landscape of Liverpool somewhere upon that redrawing the name Wizards of Twiddly will be somewhere at the forefront.these impish rascals have proven themselves to be mercurial musical magpies.''

Bandcamp Daily  your guide to the world of Bandcamp